Camm Farms are a large farming company growing grain, sugar beet, carrots, onions and  potatoes.  Welvent have built four stores there over the years – two grain stores, an onion store and a 2000 tonne box potato store for processing some 20 years ago. The old box store is the one to be converted after long discussions of how best to apply CIPC gas and to ensure an even distribution of CIPC mindful of the upper limit for residual levels of 10ppm.

We looked at converting the store – a positive box ventilation – with a wall across the back of the store.  This lost a lot of tonnes/storage and it is still not proved that this system will be accepted as the optimum way to add CIPC gas positively, so we opted for converting the store to bulk as this is a positive way to add the gas and is accepted as the optimum way to add CIPC by the approved holders and the BPC.  These discussions had been held with the farm manager Mark Pickard and growing manager Carl Rust and their potato adviser Peter Houghton.

The store had been constructed as a 2000 tonne box store in 1994 so it was nice and high to tip trailers in and to lift the floor to give under floor ventilation.  We contacted the construction company of twenty years ago – De Ville & Lear - to find out if the old building would carry the extra thrust imposed by the bulk crop of potatoes.  The store was deemed strong enough so we went forward and quoted to convert the store to bulk. To convert the store we removed the two old mixing boxes and all the electrical equipment.  The store had a single centre roller shutter door so the front of the building was removed and two new insulated panel doors fitted.  The centre door and all the old air inlet openings were clad over.  All the new clad areas were spray foamed over to match the existing insulation by our own operatives.

The concrete panels were ordered and were on a six week lead time so it was decided we would install the new tunnel, fans, mixing box, roof heaters and louvres before we fitted the walling.  The bulk of the electrical work was carried out in the store before the floor was laid, this included extending the mains supply to the centre of the store with new distribution boards and all new wiring.  The old lights were removed and replaced with white light soms.  The existing louvres were reused and new louvres added to suit the extra airflow.  The louvres were fitted with a new type waterproof Belimo motor.  The store has a centre personnel door that allows you into a lobby area with the tunnel access door and access staircase up the side of the tunnel.

The floor was to be a concrete floor with timber level floor laterals at 6’0” centres some 14” deep.  The bottom of the laterals were tapered to keep the air speeds even from one side of the store to the other.  The floor took four weeks to lay with the top being power floated.  The shuttering was made with softwood timber with phenolic ply so they are easy to remove.  The concrete was delivered in a conveyor lorry so we could pour three runs per day with ease.  The shutters were made specifically for this store, but are adjustable in size on the width to reuse again.

The timber laterals are 28” wide x 3” deep, machined to suit the concrete rebates with a 6mm gap to each lateral to give even airflow across the whole crop.  As the floor level has been lifted some 17” then there needed to be a new concrete apron to the full width of the building x 40’0” deep.  This gave a long slope up into the store. The electrical supply was only 70 amps as it had been a box store so we used three very efficient 1120 dia fans with 7.5kw motors with an inverter control panel to keep within the supply.  We have achieved upto 70cfm per tonne for drying and the fan can be speed controlled down to 30-50cfm per tonne for cooling.  The control system has a drying programme to make best use of ambient conditions to dry and make sure there is no condensation formed on the potatoes whilst drying.  There are 14 crop sensors that can be jack plugged into junction boxes fixed to the hand rail each side of the tunnel.  The control system hunts for Economy 7 electricity at all times to give the cheapest running cost possible.  The controller will control a refrigeration plant if added at a later date.

CIPC is added at the back of the store into the tunnel via a gassing port under the fans.  The fans can be speed controlled from outside next to the gassing port so there is no need to access the store whilst gassing.  The gas is put in with the fans running very slowly so the gas is distributed evenly.  The gas being added in this way may mean less gassings which means a lower dose and saving in monetary terms.

The controller is supplied with a memory stick so all temperature data hours run and settings can be reviewed on the office computer.

We can also send a text message of temperatures each day to a mobile phone.

This has been a large conversion but it has brought the store into the 21stcentury for ventilation and CIPC gassing of potatoes.

The work by Welvent involved: 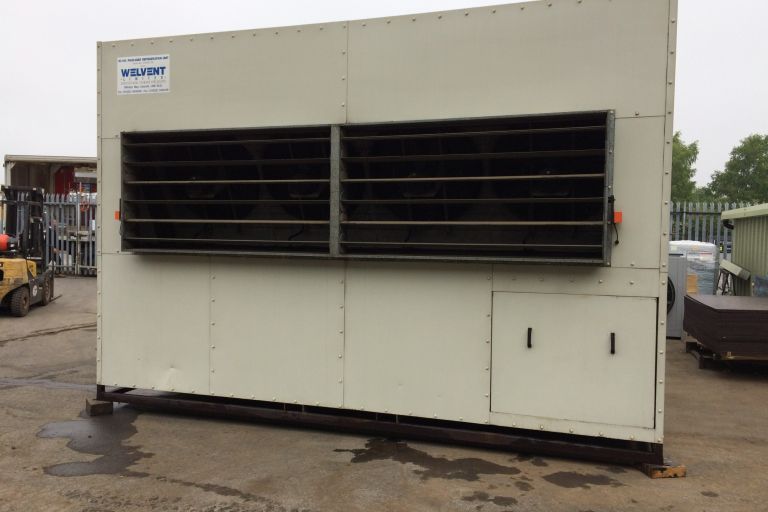 Call us or send us a message using the form below...